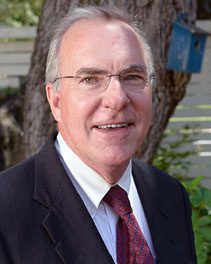 Fred Jones is a founding shareholder in the firm, and has been recognized as one of the Best Lawyers in America by Woodward/White, Inc., and is rated AV® Preeminent™ (the highest possible rating) by Martindale-Hubbell®, based on reviews by judges and his fellow lawyers. These two services are universally regarded by both the profession and the public as the most credible guide to legal excellence.

A graduate of Texas A&M and St. Mary’s University School of Law, Jones was licensed by the State Bar of Texas in 1979 and has been certified since 1985 by the Texas Board of Legal Specialization as a specialist in Commercial and Residential Real Estate Law.

As a courtroom lawyer, Jones has represented property owners, title insurers, product manufacturers and suppliers, business owners, municipalities and counties in resolving a variety of disputes. He has handled lawsuits involving mortgages and lien priorities, ownership of surface and mineral interests, and ownership of the banks and beds of rivers. In all, he has more than four decades of experience in the trial and appellate courts. He has prosecuted and defended claims by and against lawyers and other clients in professional liability and other estate and fiduciary litigation.

Jones began his legal career as a Law Clerk to the Honorable Adrian A. Spears, Chief Judge of the United States District Court for the Western District of Texas.  He then entered private practice and later served as the Chief of the Litigation Section of the Civil Section of the office of the Bexar County Criminal District Attorney.  Jones returned to private practice, joining the firm of Sawtelle Goode, with offices in San Antonio, and later, Dallas and Austin.  While at Sawtelle Goode, Jones handled a variety of trial and appellate work. In 1991, Jones, along with his current partners, former partners Sandee Bryan Marion, John Goode, and Of Counsel John Clark, formed the firm of Goode Casseb Jones Riklin Choate & Watson.

Jones currently represents several major national title insurance underwriters, their subsidiary closing agents, and their policyholders throughout South and Central Texas.   Jones was tapped as the Attorney in Charge for the City of San Antonio in litigation over ownership of the San Antonio River and River Walk, as well as litigation over the validity of the City of San Antonio’s sign ordinances along McAllister Freeway (the “ugly signs” case).  Later, he was one of the lead attorneys hired by the City of San Antonio to defend a multitude of “vested rights” and alleged Water Code violation claims in 14 lawsuits by a major developer in the area, and other high-profile lawsuits involving zoning and historic preservation.  He was asked by the City to be the Attorney in Charge of a high-profile zoning dispute in federal court over a question of transitional housing in residential neighborhoods.  He continues to represent the City of San Antonio in complex land use cases.

Jones has also represented the City of Alamo Heights, the City of Castle Hills, the City of Alice and the City of Live Oak in land use, zoning and election litigation matters.  He has represented Bexar and Kendall County in civil rights, election contests, and regulatory and land use disputes.   In the mid-1980’s through the early 1990’s, Jones was frequently called upon to represent financial institutions and regulatory agencies, including banks, thrifts, and conservators and receivers appointed by the Federal Savings & Loan Insurance Corporation (“FSLIC”), Resolution Trust Corporation (“RTC”) and the Federal Deposit Insurance Corporation (“FDIC”).

Jones has served as President of the San Antonio Chapter of the American Board of Trial Advocates (ABOTA), a National organization of invitation-only, peer-reviewed trial lawyers, equally split between plaintiff and defense.

Jones has tried cases to juries in Aransas, Atascosa, Bexar, Collin, Frio, Kerr, Nueces, Travis, Wilson, and Webb counties, and has handled other non-jury cases and disputes in those counties as well as Bandera, Cameron, Comal, Dallas, Denton, Gillespie, Guadalupe, Kendall, Kimble, Fort Bend, Hays, LaSalle, Live Oak, Limestone, Karnes, Medina, Starr, Gonzales, Harris, Galveston, Dallas, Real, and other counties. Appearing by special permission of the U.S. District Court in Montana, Jones handled litigation and the eventual sale of a 6,000+ acre ranch in Montana.  He has also been allowed to appear by special permission in the Minnesota courts.  He has personally argued cases before the Corpus Christi, El Paso, Austin and San Antonio Courts of Appeals, as well as the United States Court of Appeals for the 5th Circuit and the Texas Supreme Court.  He has directly participated in other appeals to the Minnesota Court of Appeals and the United States Supreme Court.

Jones was born in San Antonio in 1955. He is a 6th generation resident of South Texas and is an avid photographer and amateur Texas historian. He has published two award-winning articles on events and conflicts involving the practice of law during the early days of the Republic of Texas. He has been married to Connie Webb Jones since 1974.  They are the parents of two sons and one daughter, and the grandparents of three grandsons and two granddaughters.